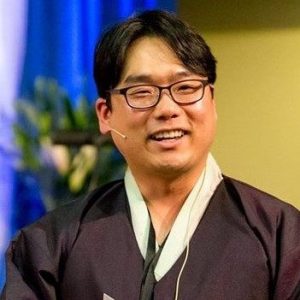 Do Young was born in Yeo-Su, a seaside country town of South Korea, and raised in a Christian family. During his childhood, he experienced different cultures and challenges within his church community, which strengthened his faith. During his high school years, he felt his calling into the field of ministry. When he graduated high school, he started Theological Study in Seoul. Do Young graduated with a BA (Christian Education), and completed his military duty for 28 months during his study.
Do Young and his wife, Dana (Da-Eun) were married in 2002, and are blessed with two daughters, Hayeon and Haryne. Do Young and Dana moved to Sydney in 2003. In his early days of the settlement in Australia, he started his training at Hillsong International Leadership College for Children’s Ministry. He also studied at United Theological College in Sydney for the Graduate Diploma of Theology and a Master of Theology from Han-Nam University & Charles Sturt University (Co-teaching).
Do Young was invited to Sydney Myungsung Korean Church as a Youth Pastor in 2003 and he also served at Cheil Korean UC till being a candidate. He was called as the first ordained Minister in Korean Presbytery in NSW & ACT in 2012. Soon after, he was called to Adelaide Korean Uniting Church, where he served 4 years. Now he is serving Payneham Road Uniting Church, which is a culturally diverse community, since 2017 and he is also serving in Prospect Road Uniting Church since 2020.

You can puchase tickets by going to: https://events.humanitix.com/when-multicultralism-transforms-worship-do-young-kim